My favorite movie of all time.

I have seen it too many times, too many times to count. It's a fun story about three friends who share a small apartment in Delhi and their encounters with love, life and work. Chasm-e-Buddor i.e. Touch Wood. tells a tale of true love and true friendship with lots of satire and ironies built in. 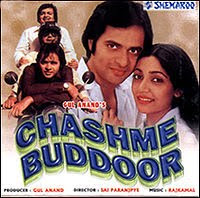 The movie shows-off Delhi in it's prime, in the 80s when the population was still low and the roads wide and traffic-free. The city was green with minimal buildings and pollution. The story begins with "Yeh Dhuan sa kahan se uth-ta hai...." written by Mir Taqi Mir, one of the finest poets of his time and a very popular gazal sung by Mehdi Hassan.

The first scene begins with 3 friends, Sidharth, Jomu, and Omi sharing a cigarette, almost makes you want to have a smoke as you watch this scene. It introduces their personalities within seconds of this. Sidharth wants some peace and quiet, while Jomu and Omi prefer a soundtrack to their lives. It's summer time and they are off from college, but bored sitting at home.

The next scene that follows is an ashtray being emptied over the landlord's plants and Omi (Rakesh Bedi) sees a girl (Deepti Naval) walking down the street from probably 50 feet and feels the urge to call his other friends to "check her out". Upon his shrieking Jomu (Ravi Vaswani) comes to the balcony and is equally happy to see her. Then they go on to recite some poetry:

Ban kar sawar kar woh nikle makan se
After getting ready for the day, she left her home...
Yahi shor hoga, yahan se wahan se
Looking at her, there will be many sighing and screaming...
Qayamat, Qayamat, kise keh rahe ho
What is the End of the world...for she is too beautiful and...
Woh dekho Qayamat chali ja rahi hai...
I can see the End of the World through her eyes

Many of the emotions are lost in translation, but that's the gist of it.

They go on to tell their studious room mate Sidharth that the girl is beautiful. In their description of of her they get carried away and Jomu sets out to find "her". Thus ensues a competition between Jomu and Omi to win the girl. However, during the course of winning the girl, they are humiliated and the humiliation sequences are deliciously funny. These roommates owe money to the local pan-wala, Lallan miyan played by Saeed Jaffrey, who is actually a kind-hearted fellow and lets them off the hook, as he enjoys their antics. For an actor who is brilliant, well-rounded and well-educated, Jaffrey does a phenomenol job at portraying a poor pan-wala. You will imagine him a pan-wala in real life. His scenes with the three main characters are a delight to watch.

And so the movie is off to a funny start and doesn't lose it's elasticity for a single moment. The music by Rajkamal and the lyrics by Indu Jain is weaved into the fabric of the script beautifully. You won't feel the songs are a burden on the script, not even the sad one. It's Yesudas and Haimanti Shukla singing the classical numbers; Kali Ghodi Dwar Khadi, Kahan se aye badra. The fun song: Pyar Lagawat, sung by Hariharan, Shailendra Singh and Yesudas makes you feel giddy watching these guys having so much fun throughout Delhi and Gurgaon. The song sung by the hero and heroine, gives dancing around trees a whole new meaning.

The one and only fight scene is more of a spoof.

Deepti Naval (Neha), the love interest, shows what a flexible actress she is and she can switch characters flawlessly from the bubbly wannabe actress Jomu likes; to the sophisticated lady Omi wants; to the simple and heart-warming Chamko Soap Agent Sidharth falls in love with. The scene where Neha and Sidharth meet is not your typical boy meet girl scene. Farooq Sheikh always exceeds expectations and here he plays the character with utmost ease and charm. His transformation after falling in love is a great scene of shopping in Connaught Place (I think). Rakesh Bedi is at his careers best and delivers a great performance as a poetry buff and a die-hard Ghalib fan. Ravi Baswani is hilarious. His dialogues are spot on and one can never guess that this is his first movie. Both Rakesh Bedi and Ravi Baswani play the "skirt-chasers" smoothly.

Sai Paranjpye has done some contrasts of happiness and sadness by either having the Indian Koyal (Nightingale in english) cuckooing during a happy scene or a crow crowing during a frustrating scene. She has also portrayed the life of students as romantic but poor. There is even a scene starring Amitabh Bachachan and Rekha.

There's a great balance in comedy and romance, neither of which feels heavy one way or the other. It's a simple story told with great scenes of Delhi minus any ridiculous melodrama. The comedy is subtle but powerful. The dialogues crisp but hilarious. An all-time favorite from the Parallel Cinema of Bollywood, and a MUST see.
Chashm-E-Baddoor Deepti Naval Farroque Sheikh Sai Paranjapye

Let me start out by saying that very few movies are directed with this much care and attention. It is a simple story of a young boy who struggles everyday at school for the smallest and simplest things. His teachers are in a rush to teach him, but he can't learn. His parents are desperate for him to be as successful as his older brother, but he has no interest in success per say. IshaanAwasthi is more interested in seeing magic in his day-to-day life. He sees things in a different light, his world consists of the simplest joys, watching the most mundane things around him and bringing life to all he sees around him.

As the movie unfolds, you can't understand if this kid is being difficult or if he simply doesn't care. You really feel the frustrations of those around him and you even feel his frustrations against those around him. He's deemed Unlucky by the principal of his school and his parents are asked to take him to a school for "special children".